The Bald Eagle has been the national emblem of the United States since 1782 and a spiritual symbol for native people for far longer than that. These regal birds aren't really bald, but their white-feathered heads gleam in contrast to their chocolate-brown body and wings.


The bald eagle’s nest is a large platform of sticks built atop a large, isolated tree or pinnacle of rock located within easy flight of water. Nests are usually about 1.5 metres (5 feet) wide, but old nests can be almost twice this size. The two or three eggs laid within take slightly longer than a month to hatch. Both parents share in the incubation and feeding of the young. The immature birds are brown with whitish tail and wing linings, but the pure white head and tail plumage do not appear until the birds are four to five years old.

The most obvious differences between male and female Bald eagles are their size. Females are usually a third of the size larger than males. Females tend to weigh between ten to fifteen pounds more. Females will typically have a wingspan of up to eight feet. Whereas the males weigh between five to ten pounds less, with a wingspan reaching up to six feet.

This characteristic of the females being larger can be seen in all birds of prey. The scientific term for this size phenomenon is known as “reverse sexual size dimorphism.” The females do the majority of the incubation when it comes to nesting, and the males do the hunting. The size difference fits perfectly for their duties; males’ smaller, sleeker body enables them to be slightly better hunters and the females’ larger size allows her to sit for longer periods on the nest. The larger size in females is also a great deterrent for predators approaching the nest.
Another notable fact among Bald eagle females is their dominant personality and protective nature. Bald eagles have a monogamous mating system. These birds mate for life, many times not even choosing another mate when one of the pair passes on. 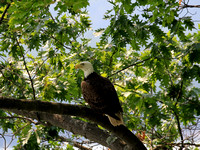