Two loggerhead sea turtles were released back into the Atlantic Ocean on July 12, 2018, at about 10:45am.

ADMISSION NOTE:
Skerry is a sub-adult loggerhead that was found in the St. Lucie Power Plant Intake Canal. The initial blood-work showed anemia and slight hypoglycemia. There are old boat propeller wounds that are healing on the carapace, neck and near the tail. Hospital staff administered fluids, antibiotics and iron. Initial radiographs did not show anything of concern internally. The turtle was put into freshwater to remove the barnacles, leeches and other epibiota that covered the turtle’s body. We will continue to monitor blood-work closely as we treat Skerry.
- - - - - - - - - - - - - - - -
Eloise
Species: Loggerhead sea turtle
(Caretta caretta)

ADMISSION NOTE:
Eloise was found floating off Ft. Pierce and was taken ashore by concerned citizens. The turtle was lethargic, debilitated, and covered with barnacles and leeches. Blood work revealed anemia, hypoglycemia, hypocalcemia, and a lack of white blood cells. Radiographs indicated that the turtle was impacted with a large amount of crab shells and other debris. The turtle has been started on parenteral nutrition as well as antibiotics, fluids, and supplements and it is being monitored very closely. The turtle was kept in fresh water for the first 36 hours to help eliminate the barnacles and leeches and is now back in sea water. 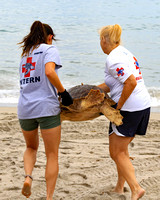